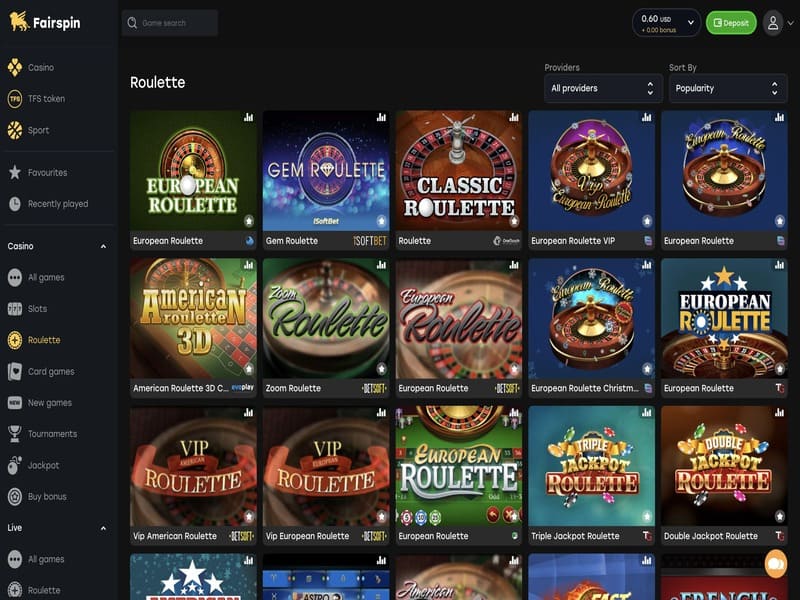 Even experienced players will be pleasantly surprised by the variety of entertainment at Fairspin. There are not only traditional casino games and live games, but also virtual sports, betting on real sports and esports. Many games have demo versions. They will allow you to get to know the chosen entertainment in more detail without risks.

Fairspin now has games from more than 40 providers. Among them are Betsoft, Booongo, iSoftBet, NetEnt, Pragmatic Play, Playson, Spinomenal, and many others. 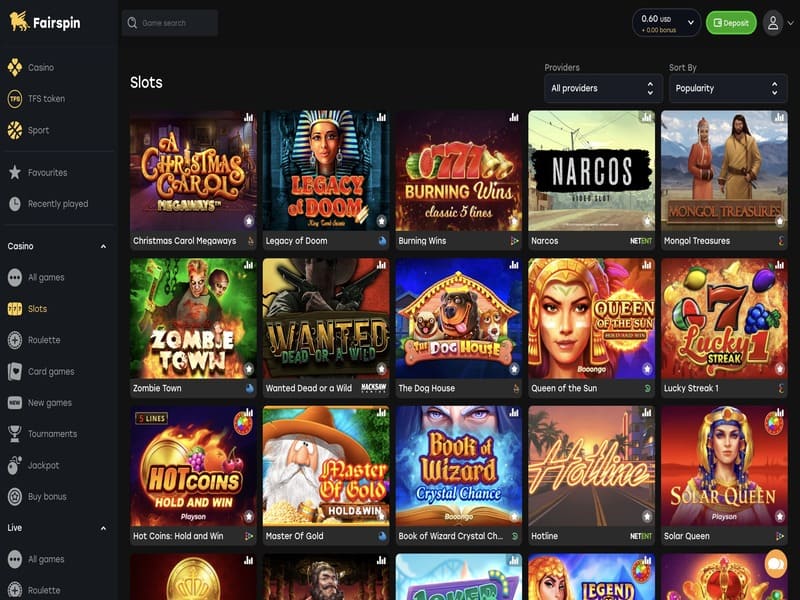 Slots are one of the most favorite players' entertainment. Knowing this, Fairspin is constantly expanding its collection of slot machines. In this section, you will find games with a wide variety of themes: classics, holidays, ancient civilizations, adventures, animals, sports, and others.

There are three slots that are particularly popular among Fairspin players right now: The Dog House, Hit The Gold, and The Dog House Megaways.

The Dog House is a slot machine by Pragmatic Play dedicated to favorite pets, dogs. The slot has five reels, three rows, and 20 paylines. The game has beautiful graphics and a pleasant soundtrack. The main features of the slot are bonus rounds with free spins, as well as Wild symbols, thanks to which you can significantly increase your bet.

Hit The Gold is a Booongo slot with a 5x3 playing field and 25 paylines. The game offers to immerse yourself in an exciting pursuit of gold, in which the main prize is x2,000 jackpot. Among the features of the game, it is worth highlighting the presence of Scatter symbols, free spins, and a bonus game.

The Dog House Megaways is a The Dog House inspired slot with Megaways mechanic. The slot has a 7x6 playing field and offers 117,649 ways to win. The game has not only free spins but also unusual elements: Raining Wilds and Sticky Wilds. All this allows you to multiply the bet significantly. 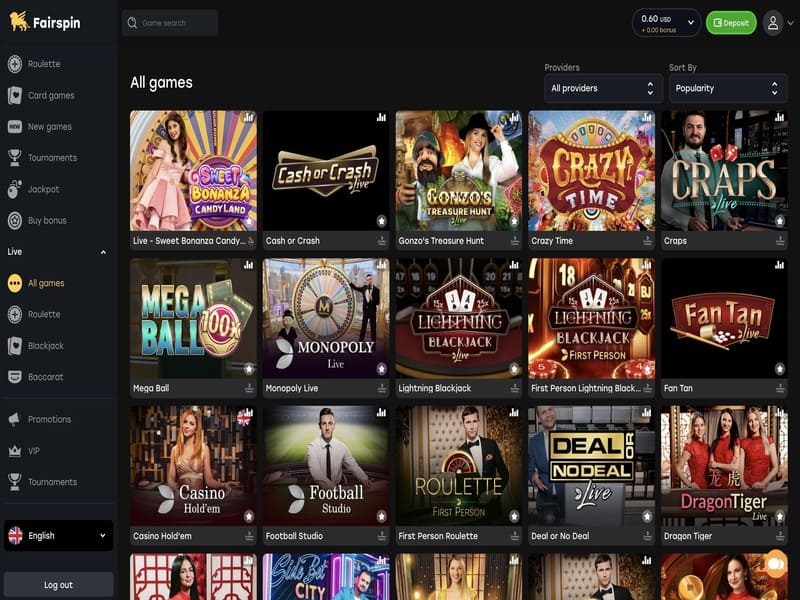 The Fairspin website has a separate section with mini-games. It features a collection of games with simple gameplay and clear rules. Their gaming processes last quickly, so you do not have to wait for the results long. The games in this section have demo versions that will allow you to understand the essence of such entertainment better.

The top mini-games at Fairspin are now Aviator, Plinko, and Dice.

Aviator is a game by Spribe that is nothing like typical casino games. There are no reels, rows, and special symbols here. Instead, a flying plane is in the center of the game. With its movement, the coefficient in the game also increases. The player's main task is to collect their winnings (bet multiplied by the coefficient) before the plane crashes and the game stops.

Plinko by Spribe is inspired by the entertainment of the same name from the TV show The Price Is Right. The playing field here is shaped like a triangular with barriers. As soon as the player makes a bet, a disk appears at the top of the playing field. Going down, it will hit obstacles so that the direction of its movement may change. At the end, the disk will land on a box under the playing field. The coefficient on it, multiplied by the bet made, equals the player's winnings.

Dice is another game by the Spribe provider. The results of dice rolls in the game range from 0.00 to 99.99. The player's goal is to guess whether the result of the round of the game will be less or more than the proposed numbers.

At Fairspin, you can not only play various casino games but also bet on competitions. Among the sports represented are hockey, football, basketball, tennis, boxing, and others. It is also possible to bet on esports competitions, for example, Lol, Dota 2, CS:Go. In the section, you can find more detailed rules. They will help you get to know the features of the betting process at Fairspin. 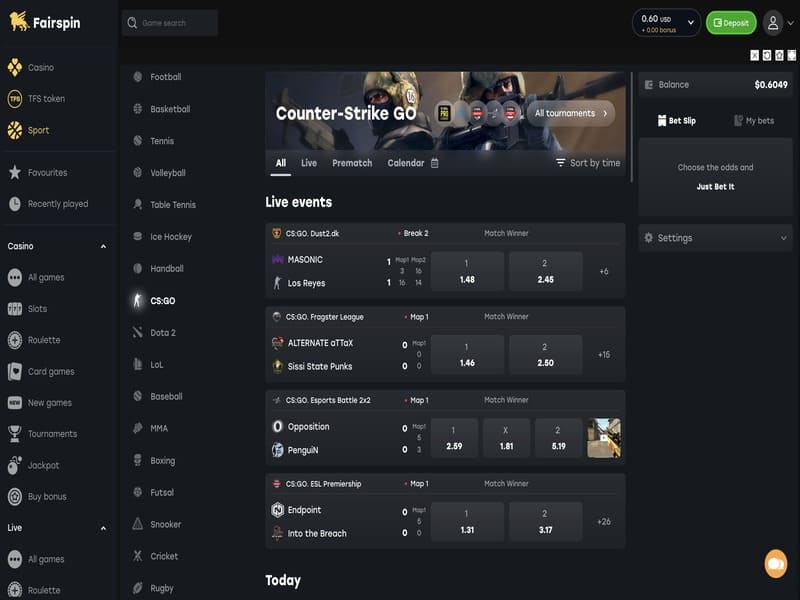 The holding of traditional sports competitions largely depends on external factors. And if the event is canceled, the opportunity to bet on it disappears. But there is entertainment that allows you to bet on competitions at any time. It is about virtual sports.

This is a simulation of real sports competitions with the help of computer technology. And at Fairspin, you can enjoy such entertainment. There are virtual motorcycle races, bicycle races, football, horse racing, greyhound racing. Games can also be launched in demo mode. 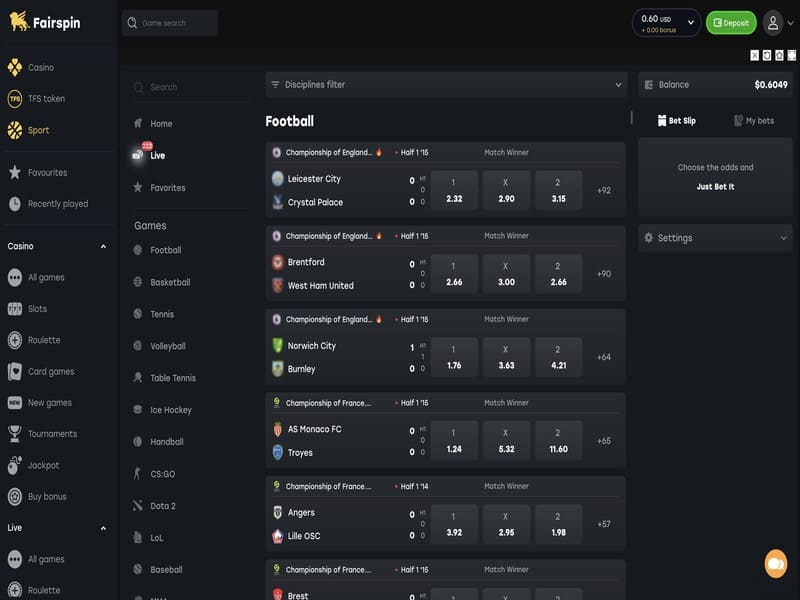 Live games are the favorite entertainment of those who enjoy the atmosphere of real casinos. A professional dealer in a specially equipped studio manages the gaming session here. In the Live section of the Fairspin website, you can find many different types of traditional games (roulette, poker, blackjack, baccarat). And there are also more unusual entertainments in which cutting-edge technologies are used.

Crazy Time is a top-rated real-time game created by Evolution Gaming. The main element of the game is the Dream Catcher money wheel, which allows you to get big wins. There is also Top Slot that generates multipliers and four bonus games. The maximum multiplier in the game is x25,000. 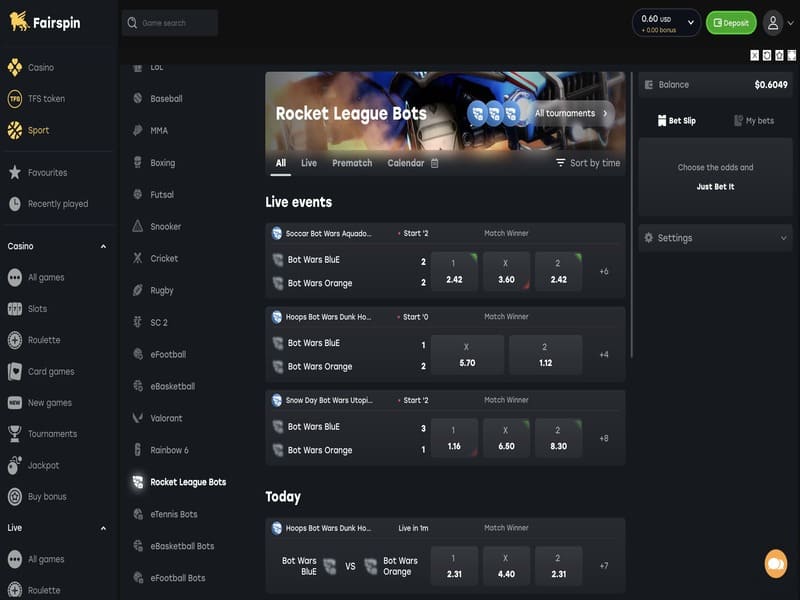 Another entertainment that many players love is Lightning Roulette by Evolution Gaming. This is a variation of the classic roulette with an unusual bonus element. In each game round, from one to five numbers are automatically selected, and they receive certain multipliers. If the ball on the wheel stops on one of these numbers and you have previously bet on that number, your reward will be multiplied by the coefficient selected earlier.

Also, among the live games, it is worth highlighting Cash or Crash by Evolution Gaming. This is a game with the drawing of balls of different colors and a 20-level payout system. After the green ball is drawn, the player gets the opportunity to go up one level. A golden ball drawn not only allows you to go to the next level but also gives an additional shield. It can protect the player from losing when a red ball is drawn. The maximum multiplier in the game is x50,000.